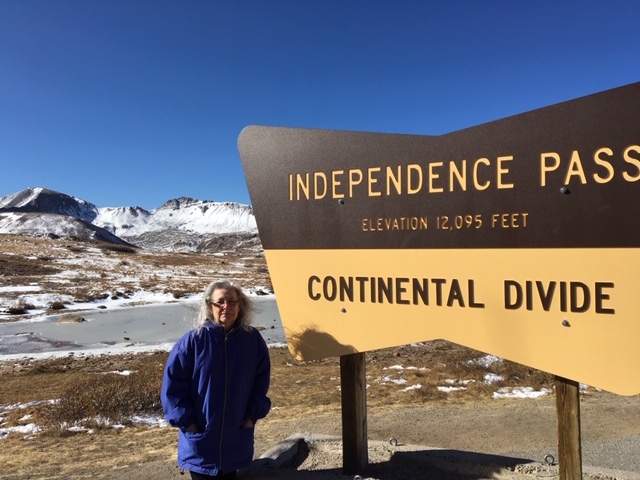 Patty loves John Denver music.  She discovered an annual John Denver Tribute in Aspen which celebrates his life and music each October.  Plus she had never visited Colorado.  So this year we added this trip to our bucket list.

I had been to Denver a few times on business in my career as a record promotion rep.  Yet I had never covered a concert at the famous Red Rock Park Ampitheater.  After flying into Denver and renting a car, we drove to Red Rock to check it out.  Walking around the complex and nearby museum gave us a taste of the musical history of the state.  And what a beautiful sight with downtown Denver as a backdrop!  John Denver performed here 16 times and oh how it would have been special to see and hear his melodious vocals in this natural acoustic setting.

After lunch, we checked into our hotel, then walked around the 16th Street Mall.  It stretched from the Civic Center to Union Station.  If you know Pat, you know we had to sample the local Rocky Mountain Chocolates!  We topped off our first day with a dinner at Elway’s Steakhouse inside the Ritz-Carlton Hotel.  YUM

Next morning we woke up to snow and a 50 degree drop in temperature!  We had to cancel our drive up to Estes to witness the Rocky Mountain National Park because some of the roads were closed.  The weather was so bad we couldn’t get out of Denver until early afternoon.  A local suggested an alternate route that avoided some high mountains  along I-70 west of the city.  Over 3 hours later, we arrived in Aspen at the Molly Gibson Lodge.  Thankfully, Aspen only got a dusting of snow.  So here we were, over 12 thousand feet above sea level, surrounded by autumn aspen trees and ski resort mountains.  Day 2 was complete after pizza at a local eatery recommended by our hotel staff.

Day 3 began in the single digits.  Nonetheless we set out to find the John Denver Sanctuary in the Rio Grande Park.  Since it was so cold and early, we had the place all to ourselves.  What a wonderful spot.  Almost spiritual.  Song lyrics engraved into these large, vertical rocks. In fact, it’s referred to as the John Denver Song Garden.  It was so quiet.  All you could hear was the slowly rushing stream along a trail by the Sanctuary.  Very inspiring.  And did I mention cold?  The snow that had collected around the landscaping added a special touch.  We would return the next day when it was much warmer to enjoy the spiritual peacefulness that seemed to typify John Denver’s musical messages.

We  attended a midday “Jim Horn Adventures”, a story telling of road experiences with John Denver.  Mr. Horn played many wind instruments for John’s tours around the world.  Jim was/is a successful studio musician, having been a member of the famous west coast Wrecking Crew.  He now lives in Nashville.  We would return to the Mountain Chalet later in the evening for the Ron Matthews Concert, featuring all John Denver songs performed by Ron on his 12 string guitar along with guest players.

Day 4 included strolling the main downtown area of Aspen, sampling cafes, shops and bars.  The ski season hadn’t begun so it wasn’t too crowded on this particular weekend.  Pat and I attended the Aspen Meadow Band Saturday afternoon show at the Limelight Lodge.  Good tunes but no focus on John Denver, rather a local charity fundraiser.  We slipped out early to enjoy a leisurely dinner at the Aspen Public House, next door to the Wheeler Opry House.  The evening attraction was the 22nd annual Tribute Concert and it was outstanding.  Some of the entertainers were past friends and/or band members of John Denver.  All his hits were featured.  Lots of fun moments and memories.  All the while, John’s guitar centerstage sharing the spotlight. Smiles and few tears filled the Opry House.  All in all, a marvelous ending to our stay in Aspen.

Our final day in Colorado was for me, a highlight.  After breakfast, we checked out, fueled up the rental car and headed back to Denver.  This time a different route from the one that brought us to Aspen.  I had heard about the Independence Pass and what an interesting drive it was…but Oh my God, it exceeded my expectations!  The views were incredible.  The road around the mountains was so narrow I had Patty take over the camera/phone to take photos.  The snow capped Rockies were absolutely majestic.  We stopped at the Continental Divide for more pics.  Then on to Mile High Football Stadium.  The Tennessee Titans just happened to be playing the Broncos on the Sunday of our trip so we watched the Titans play the worst game of Marcus Mariota’s career.  Even so, it was a cool wrap up to our trip.  Our late night flight home was uneventful.

Colorado is a must see destination.  If you love to experience America from different geographical locations, there is so much beauty to take in from this state.  In fact this country is an awesome collection of natural wonder.  I’m so glad Pat had John Denver and the Rockies on her bucket list!